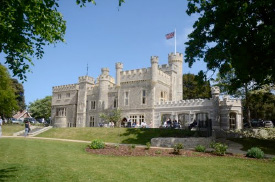 Whilst Whitstable Castle is probably not renowned as a bastion to the defence of Whistable itself, its seat on Tankerton Hill overlooking the harbour has a prominent location for its original purpose in the late 18th Century as a residence. Initial construction was the octagonal tower to which further elements were soon added.

JC White Geomatics was initially involved in 2007, producing a topographical survey of the extensive grounds. Through Lottery Funding the scope of works expanded for which a full measured building survey of the castle was required. 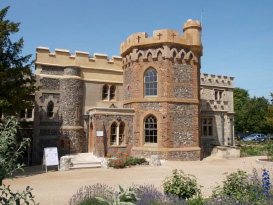 As the companies preferred method for carrying out measured building surveys, TheoLt software was implemented for all internal survey work.

Utilising established external survey control carried out by J C White Geomatics Ltd., an internal control network was established to which survey data was drawn in real time. Additionally all heighting and section information was obtained insitu allowing 90% completed and verified drawings to be passed back to the office for formatting and drawing completion.

A complete external laser scan survey of the elevations was carried out, along with the accessible roof areas. Colour photography was also captured to enhance the scan data. All data was related to the existing site control network using coordinated targets and registered within the Scene processing software.

Digitising was carried out within AutoCAD using Pointools plug-in software. External floor profiles and sectional information was extracted along with the main elevations to complete the internal drawings.

Real-time verification checks were taken during the site work by the surveyor using TheoLt’s in-built quality assurance system. Prior to further drawing production in the office hard copies were filed and independently checked. A final site visit was made by a Senior Surveyor to verify the drawings prior to issue.

The building work was completed late 2010 and the Castle is now open to the public.