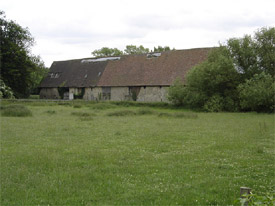 Grade 1 listed and on the English Heritage ‘At Risk Register’, the Barn is a notably important building which has seen the test of time over its 600+ years of existence. Currently used partially as an overnight animal shelter, the building was once Hospitium to the Cistercian Abbey for which little now remains. The barn is an imposing 60 metres in length and constructed of local ragstone.

Following a site meeting with English Heritage and the Client, a decision was made to initially carry out urgent remedial works to prevent further water damage to the roof’s structure and the internal fabric. J C White Geomatics Limited were requested to provide base drawings of the roof structure to enable detailed mark-ups for the condition report.

After initial consultation it was felt the preferred method of surveying the building would be by Laser Scanning over a more traditional EDM/TheoLT recording. The factor which concluded this decision was notably the height and accessibility to the trusses, which have an average spacing of 0.5 metre and reach up to 12 metres high at the ridge. A further benefit of using laser scanning would be that the whole of the building could be surveyed and recorded at the same time providing an archive for future works.

An external closed traverse network was established which included two internal links taking in the ground and first floors. All survey stations were used to establish target control for the laser scan survey along with remote checks to verify scan data quality. GPS SmartNet was used to establish Ordnance Survey National Grid and level datum.

A total of 105 separate laser scans were taken, generally at a resolution of 6mm at 10 metres (Approx. 40 million points per scan). Scans were force-centred at fixed traverse stations as well as numerous intermediate locations around the building, each incorporating at least 4 reference targets for registration. Reference spheres were also located within the scans as an additional controlling element. In total almost 1.25 billion (US) points were captured and controlled. 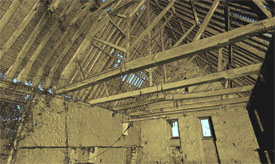 All laser scans were filtered prior to registration using Scene’s predefined parameters. This reduced noise and erroneous data within the pointclouds. Registration was carried out using Scene’s semiautomated method. This included target recognition and referencing which provided ‘best fit’ locations for each scan based on the given surveyed coordinates. QA checks were carried out to ensure fitting on all scans was within required specification and independent survey checks correlated with the data.

Digitising of the scan data was carried out in Rhino with Pointools plug-in. Drawings were constructed in 3D and then transferred to 2D for plotting and presentation. Some orthographic intensity images were supplied as a bi-product.

Final production drawings issued included 92 roof truss sections/elevations, internal longitudinal sectional/ elevations and a ‘cover-off’ roof plan. These were delivered in digital format (Dwg) and A3 paper copies formatted for use on site.