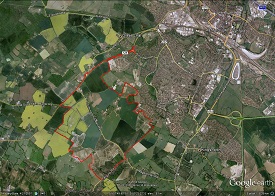 To satisfy the problem of providing places for an ever increasing population to live, work & play the Government identified a number of towns throughout the UK and encouraged their local councils to develop strategic plans to include a dramatic increase in housing.

Ashford Borough Council adopted their core strategy in 2008 and identified a number of potential sites surrounding the town, one of which was Chilmington Green.

A developer consortium was formed with the plan to provide around 3,350 homes by 2021 with the potential to increase up to 7,000 at a later stage; the development will form a whole new community with a high street, schools, open space and around 1,000 jobs.

The process is at a very early stage and J C White Geomatics Limited was chosen to provide the base information for initial planning and design.

To provide topographical survey of the whole development area for initial planning and design.

Prior to submitting a quotation the survey brief was discussed with the Project Engineer and the Consortiums planning advisor.  A detailed quotation was supplied and on instruction further discussions held to clarify specification and confirm amendments.

The specification required a local grid with an arbitrary orientation and a conversion to Ordnance Survey National Grid (OSNG); GPS RINEX data was used to establish a site wide plan grid with a scale factor of 1 which allowed both local & OSNG coordinates for a series of main control points. Level datum was based on GPS RINEX with checks to local benchmarks.

Spot heights and ‘soft’ detail within the open areas were surveyed using GPS with daily checks to control established at the outset of the project.

Detail within the main site, adjacent to and beneath the trees, was surveyed using Leica 700 series TCR instrument.

Within the survey area there were a number of roads to be surveyed, some of which involved rolling traffic management and temporary road closure all organised internally. Road detail within the live carriageway but outside of the area for traffic management was surveyed with Leica TS15 in reflectorless mode.

Initial control processing using GPS data was carried out in Leica GeoOffice to establish OSNG coordinates for all control with a conversion to a local plan grid; once local coordinates for survey control were established the survey was processed using N4ce survey software with all GPS and TCR control checks verified prior to detailed processing.  On completion of N4ce processing the project was exported to AutoCAD for drawing preparation and then initial checking by a Senior Surveyor prior to a site visit for field verification.

On completion of the final drawing using AutoCAD a rigorous final check covering all aspects of the survey with particular emphasis on cartographical standard, was completed by a Senior Surveyor following which the survey was issued to all interested parties as a 3D AutoCAD file and paper plans.

Following issue of all survey information the project Engineers and the Consortium were contacted to ensure the survey covered the necessary area and scope and were asked for any feedback.